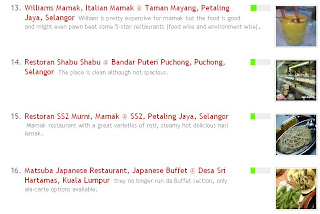 All interesting places include
It's already July, with half of 2008 behind us. Maybe it's time for a half-yearly review of favaourite food and restaurants of fellow Malaysian.
Posted by Unknown at 12:00 am

For us when we visit some blog site our main objective is to ensure that we will be entertained with this blog.

To the owner of this blog, how far youve come?You were a great blogger.

Freedom of work is good but sometimes it is risky to leave your job for an uncertain trade. You can find more better opinion on https://www.huffpost.com/archive/ca/entry/to-pay-or-not-to-pay-someone-to-write-my-essay-for-me_b_14793970 forum regrading Malaysian Food.