Looking for a Awesome Programmer + Co-Founder
to develop an awesome food sharing app, and change the world together :) 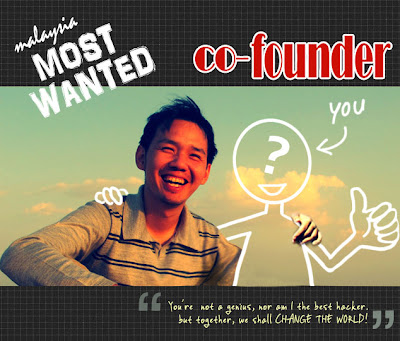 I read somewhere that co-founder is not someone you can find (but earned), and this post sounds like a “Girlfriend or Wife wanted” ads, but I still believe there is a good reason and purpose behind it. I know it’s not easy to build a team that jelled, and most start-up would probably fail, but I still think it's worth pursuing since I can't shake the idea (start-up and co-founder) off my head. I choose the path to go far.

For starter, let's learn something together about Co-Founder and Partnership through the following wisdom:


What is Malaysia Most Wanted?
Malaysia Most Wanted started as a property website 6 years ago, and Food & Restaurant is the second product. We developed an event listing and a price checker, and almost went on to do travel website. Our current plan is to focus on Food; she serves as a restaurant review and directory site at the moment, but we plan to slowly transform her into a food sharing app. [some snippets]

Some statistics: Malaysia Most Wanted food is hovering around 250-300K unique visitors per month, almost clocking 1M page views with 8000+ restaurants listed coupled with almost 20K reviews. Arguably, we are the No.1 restaurant reviews website in Malaysia.

Cruel fact: we have no business model except some AdSense dollar. Why do it? There must be some values when 1 million people use our app to search for restaurants every month.

What’s our target? Double everything within a year: 600K unique visitors and 2M page views per month, 16,000 restaurants listed, and 40K reviews. With you on board, we hope to make some inroad for mobile app.

Why choose Malaysia Most Wanted? 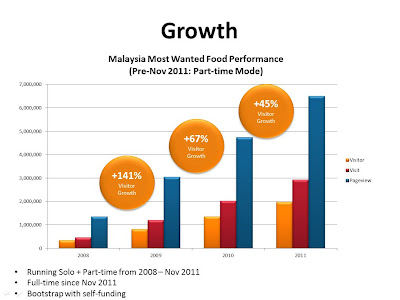 How it works?
Start-up partnership is like a marriage and courtship, and we are not going to get married on the first date. We would need to know each other, understand each other, respect each other and eventually trust each other. We shall go hangout and yum cha, talk about start-up and technology, and start working with each other by starting in some small ways. Besides passion, work compatibility and culture fit is equally important, IMHO :) (how can we work together if I hate your guts, or you found me annoying).

It is increasingly popular to have “founder dating” or “startup weekend hackathons” of some variety or the other. We get cast together with a team of people we barely know and if we win we gleefully announce we’re going to do a company together. We don’t even know whether they snore. – Mark Suster, Both Sides of the Table


Feel free to drop me an email (the worse thing can happens is that we end up as friends, not partner, but preferably both):
desmond [dot] lua (at) malaysiamostwanted [dot] com


Forrest Gump: My momma always said, "Life was like a box of chocolates. You never know what you're gonna get."
Posted by Unknown at 7:04 pm 11 comments:

Email ThisBlogThis!Share to TwitterShare to FacebookShare to Pinterest
Labels: MMW

It is time for a Malaysia Most Wanted Co-founder

It had been 3 months since Silicon Valley Comes 2 Malaysia, where during a discussion our team told Jawed Karim (co-founder of YouTube) that we are going to push through with Malaysia Most Wanted Food for another 3 months, before deciding on our future directions. After a few pitches and meet-ups, I think the general consensus is that we should be focused (preferably laser-focused); and I agree (we just don’t have enough resources in terms of time and money), thus I have leave the idea of Travelopy behind, cut down on Property, Event and Price, and focus on Malaysia Most Wanted Food. Why Food? It had gotten some good traction, an interesting market and plenty of ideas flushing out of my mind to make it better :)

After going fulltime on Malaysia Most Wanted for about 3 months, we manage to create a new UI for the entire site, keep track of restaurant promotions, allow restaurant search by map, fun ways to write reviews and do a monthly newsletter. I found that the progress is not quite up to par (could have more releases), the amount of work in the pipeline could easily take up another 6-12 months, and our mobile version (Android) haven’t quite got an update for almost a year (this is really bad). I have to accept the fact that the scope of work is beyond one person’s capability, and delaying for another 6 months to 1 year is not a good idea. I need a technical co-founder.

Why not a business co-founder? I always imagine I would have a business/marketing co-founder, to complement the skills which I don’t have, inspired by the dream team of Steve Jobs/Steve Wozniak, Bill Gates/Paul Allen and Max Levchin/Peter Thiel. I notice an article which mentions that “MBA etc are actually worth -$250k to the valuation of a startup whereas an engineer is worth +$500k”. I am guessing unless we have a solid business model in place and ready to monetize, we don’t really need an MBA; I believe a business model is settled through iteration, trial and exploration, not from the magical light bulb of a business person.

Why a technical co-founder? I think the most valuable assets of a tech start-up are its early programmers, especially in the consumer Internet space. We need to create useful, creative and beautiful product to gain adoptions, and that is not an easy task (I am still learning and iterating), and we need awesome programmers to do that. I wish I could do everything, but it’s just not possible due to time constraint and probably not advisable as well. I could manage the web-based side pretty well nowadays, could probably delve into the mobile web version as well; but I need help on the mobile side, someone to do an iPhone app, Android and probably an Facebook app as well. It’s time to harness the power of two :)

Why not employ a programmer? First of all, I don’t have the money to pay for the programmer. I don’t believe we should subcontract our core products to freelancer as well, as it sounds suicidal. I could probably raise some angel money and use that to employ a programmer, but I would prefer to give the equity to the programmer instead and let him or her to part of the family. For a small start-up like us, I need someone who could be my equal (or better than me), take initiative to suggest new ideas and says, “let’s do this!”; I don’t really need someone who ask “What do you want me to do” at this critical stage in time. I believe the first employee, should be a co-founder.

Why do it now? I guess I am a bit paranoid about getting a “stranger” as partner because breakup is hard, it’s like afraid of marriage due to worrying about a bad divorce. Partnership is like marriage, so it’s a big decision for me. Friends of my age prefer security, that’s why I went ahead solo; I need to explore beyond my usual social group, meeting people I don’t usually hangout with. It might sounds risky, but I believe it’s the right thing to do. Another reason I didn’t try to get a co-founder in the early stage is that I don’t have the heart to ask my friend to quit his job and so something crazy with me, with no promise of success or money. Now, we are slightly better off with something viable in hand.

Picking a co-founder is your most important decision. It’s more important than your product, market, and investors.
The ideal founding team is two individuals, with a history of working together, of similar age and financial standing, with mutual respect. One is good at building products and the other is good at selling them (ops!). - Venture Hacks

Will you be my co-founder, so that we can change the world together?
Email me:
desmond [dot] lua (at) malaysiamostwanted