The May Food 2008 Most Viewed Food Venue (based on Google Analytics pageview) result for Malaysia Most Wanted FOOD. 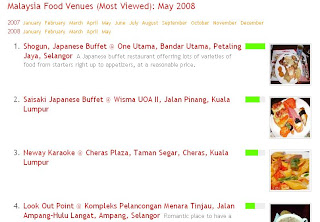 Shogun, Japanese Buffet @ One Utama, Bandar Utama, Petaling Jaya, Selangor is still holding strong on the no 1 spot. I guess it does have an advantage for being in a popular shopping complex become the talk of the town. Maybe I should give it a try someday and add to the statistic.

Saisaki Japanese Buffet @ Wisma UOA II, Jalan Pinang, Kuala Lumpur had gained the no 2 spot, another Japanese buffer which had been around for quite a while. Malaysia must have been crazy about buffet these days.

Neway Karaoke @ Cheras Plaza, Taman Segar, Cheras, Kuala Lumpur is still at the top 3, and I wonder why. Izzit because of Cheras folks, or izzit about karaoke, it can’t be about the food right?

Though there are not much changes in the top 10 spot, but the top 50 does introduces many new places worth checking out. Maybe it’s time to switch it to be top 100 instead, the more choices the better?
Posted by Unknown at 11:19 pm

hey can i have ur email? i'm having problem logging into the malaysian most wanted food site.

we have your note on our site TQ. Plse email

jasmine here ya. i having the same ploblem as kuan.

Interesting data to note here :) Shogun seems to be defending their place well. It's true they don't allow photography of their food - kinda arrogant in that sense. Maybe becoz they know they're at the top & don't need any publicity from anyone!

Sorry guys for the late reply, as the comments kinda fall into the spam email.

I had trying to send several emails to you since Feb 2008, with the latest on 24 April 2008. Perhaps the emails fell into the spam box?

Anyway, I will try to contact you through another email account. Else, you could be in touch with me at info[at]malaysiamostwanted(dot)com :)