The May 2009 Most Visited Food Venue (based on Google Analytics pageview), brought to you by Malaysia Most Wanted Food and Restaurants.

For the Top 3 spots, we have the ever popular
Saisaki and Shogun had dominated the top 2 spot for quite a while, and Look Out Point is the new No.3. 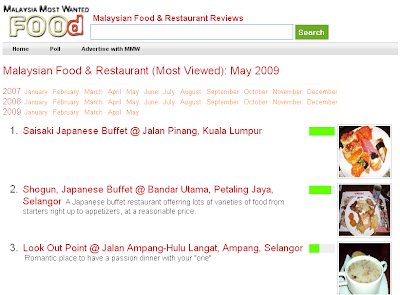 Li Jin @ Pavilion KL is gaining popularity probably due to their promotion on newspaper, and The Cave @ SS2 is also becoming popular as the “couple place”.

Then we have the regulars like Yuen Buffet Steamboat Restaurant and Restoran Shabu Shabu. Jogoya is still holding at no.8 spot and the exclusive Hajime Japanese Restaurant at no. 10. Others include Bumbu Bali and Delicious Café.

Most viewed (or “popularity”) doesn’t equal good food, but it is something which you could take note of and decide for yourself :)
Posted by Unknown at 3:26 pm