The January Food 2008 Most Viewed Food Venue (based on Google Analytics pageview) result for Malaysia Most Wanted FOOD. 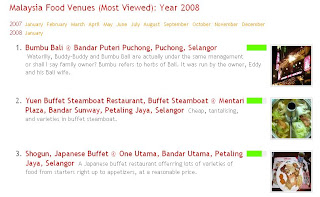 The third place goes to Shogun, Japanese Buffet @ One Utama, Bandar Utama, Petaling Jaya, Selangor: A Japanese buffet restaurant offering lots of varieties of food from starters right up to appetizers, at a reasonable price.

As of today, Malaysia Most Wanted FOOD had listed 1032 food venues for you pleasure :)
Posted by Unknown at 12:43 am

no problem .. you can link me to your blog.

Could you email me - info(at)malaysiamostwanted[dot]com? I need some confirmation regarding some details?